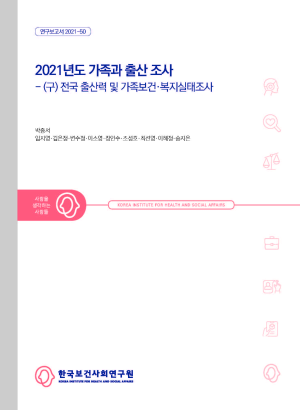 The 2021 National Family and Fertility Survey

The 2021 National Family and Fertility Survey is the only nationally-representative survey in Korea that systematically identifies the history of childbirth and marriage behavior. The main purpose of this study is to collect data that can observe changes in an individual's life course and family path, focusing on demographic behaviors such as marriage and childbirth. This survey was conducted with adults aged 19-49 and their spouses living in sample households extracted from 700 survey districts nationwide. The final sample was 9,999 households and 14538 people, and the response rate of spouses and partners was 57.1%.
The main research results are as follows. Of those in a common-law marriage or cohabitation relationship, 96.7% thought that their relationship with their partner was a de facto marital relationship. People in a common-law marriage and cohabitation relationships were found to experience inconveniences or discrimination because they did not register their marriage legally. This is because most policies in Korea provide support based on legal relationships and do not recognize family members outside of marriage.
Second, the difference in the number of births had a positive correlation with the difference in the total number of pregnancies. The average number of abortions differed significantly across predictor variables such as age, education level, age at first marriage, employment status, and household income. As in many existing studies explaining the low fertility pattern, a negative association was observed in this study between the level of education and the fertility rate. The younger the cohort, the smaller the proportion of those with two or more births. Remarkable features were observed in the responses to questions regarding whether and when the respondent had childbirths, and how many. Compared to other categories, in the number of children category, the ratio of self and the other person making decisions together was higher.
Third, there was a large difference between men and women in the prevalence of experiencing reproductive health symptoms over the past year. The prevalence of reproductive health symptoms was higher in women by 29.8 percentage points, but a large percentage of women who had the symptoms was found to have done nothing about their symptoms or used a pharmacy, without seeking help from a doctor. When asked about the sources they drew on for information about contraception, 59.4 percent of the respondents cited media such as the Internet, where it is difficult to confirm the objectivity of information. Regarding contraceptive decision making, there was a marked gender difference. While 30.3% of men respondents answered that they had self-initiation, only 16.6% of women answered that they had self-initiation. 17.2% of women in legal and common-law marriages experienced infertility. As the age of first marriage increased, the rate of infertility increased, and 33.1% of married women over 35 experienced infertility.
Fourth, differences were found in child rearing environment and expenditure items according to the age of the children. A large percentage of parents of infants and toddlers were found to use private facilities, despite their wish to use national and public facilities for their children. In addition, a review must be undertaken as to whether facility care services are provided enough for 0-year-olds, as a large share of parents of infants were found to take care of their children themselves despite their wish to use facility services. In the case of elementary school children, the proportion of parents who answered that they were satisfied with the current care situation was lower than that of infants, indicating that the provision of care services for elementary school children is insufficient.
Fifth, regarding the appropriateness of the amount of time allocated to daily activities, it was found that enough time was allocated to work, childcare, and housework, but time spent on other activities, such as self-development, was relatively insufficient. It was analyzed that about 2/3 of the respondents did not have much difficulty in work-life balance. The maternity leave system was used by more than two-thirds of the women with childbirth experience for both for first and second childbirths, but less often for second childbirths. On the other hand, the parental leave system was used by less than half of the women with childbirth experience, and in particular, only about 40% used it for a second child.
Sixth, it was found that young people became independent from their parents for a relatively long period of time from the age of 18 to their mid-30s. It seems that the period of residential independence spreads widely from the age of 18 to the late 30s, because housing changes through life events such as college admissions, employment, and marriage rather than living independently according to biological age. One of the most representative reasons for housing independence was found to be marriage. Of those who experienced marriage, 61.4% answered that the person they lived with before marriage was their parent. Those who lived alone accounted for 26.4%. Women were more likely to live with their parents before marriage than men. It can be understood that the economic vulnerability and gender norms of the unmarried youth group have an effect on the high parental cohabitation rate in pre-marriage housing.
Seventh, it was found that the respondents have values ？？that change according to changes in society rather than supporting traditional values. Rather than classifying roles by gender, men and women perform roles jointly, and even if it is family- related, there is a tendency to value individual opinions. A high percentage agreed with the claim that marriage is now optional. The division of roles between husband and wife, including child rearing, also suggested a shift to the need to work together regardless of gender. These changed values ？？showed a distinct difference by age. The higher the age group, the higher the percentage supporting the existing values, and the lower the age group, the more support the changed values.