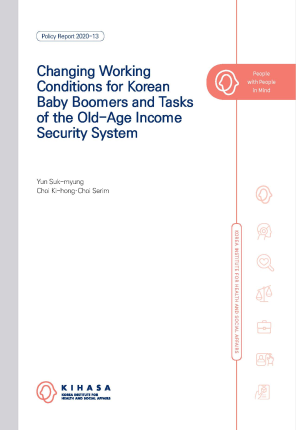 The Korean labor market has changed, and continues to change, in such a way that the more workers age, the more insecure their status becomes in the labor market, and the lower their earned income becomes. Workers with precarious working status find it more and more difficult to rise above that status over time, while regular workers who have enjoyed stable job conditions face increasing probabilities of losing their earned income in middle age.
Our microsimulations show that the current National Pension is a low-cost, high-benefit instrument of old-age income security for all income classes. With Koreans paying only nine percent of their income as National Pension premiums (far lower than the OECD average of 20 percent), the pension scheme ends up benefitting high-income earners more than those earning less. It is that raising the premium rate is inevitable, to a certain extent, in order to stem the distorting effect the National Pension has on income redistribution and its tendency to benefit the wealthy more than the poor.
The rapid increases in the amounts of Basic Pension benefits, funded entirely by public finance and not at all with contributions from individuals, might serve to disincentivize National Pension participants earning less than the median income and self-employed people with low income from continuing to participate in the National Pension. Therefore, future Basic Pension benefits should be provided in a mixed form, combining cash and in-kind (e.g., housing) benefits.
The National Pension system, too, should be reformed promptly with a view to enabling participants to plan their retirement based on the amount they have contributed to the scheme and ensuring intergenerational equity, without disproportionately disadvantaging any generation. Combining the premium increase and a life expectancy coefficient would help Korean policymakers minimize the necessary increases in premium rates, while better ensuring the long-term fiscal sustainability of public pension schemes.
Ⅰ. Introduction 1
1. Research Background 3
2. Research Purpose 8
Ⅱ. Findings of Analysis 11
1. Working Conditions and Transition Patterns of Korean Baby Boomers 13
2. Income-Redistributing Function of NP Benefits: A Comparison across Income Classes 30
Ⅲ. Policy Recommendations 37
1. Direction of Reforms for the National Pension and Basic Pension 39
2. Employment Policy for Baby Boomers 46
3. Summary 50
References 55